Olivier Dahan’s La Vie En Rose (2007), which literally translates to “life in pink”, portrays the magnificent yet complicated life of a songstress, who made famous a song of romance with the same name. Like the fluidity and commanding presence of the French singer’s vocals, the bio-pic carries the audience to the pain of her childhood and dejections during her singing career.

Edith Piaf, whose life was anything but rose-colored, was the riveting crooner who rose from the depressing suburbs of Normandy and soared to become the “Little Sparrow” that would captivate audiences the world over with her powerful voice.

Growing up, Piaf was exposed early to a dreadful life on the streets with a drug-addict for a mother and a selfish contortionist for a father, both of whom would later abandon her to an unusual childhood with a grandmother who runs a brothel and the red-haired prostitute Titine (Emmanuelle Seigner)—who, in my opinion at least, was her best parent.

Titine introduced her to St. Therese of Lisieux and a life of constant prayer and faith that love will come and see her through. However, Piaf’s unconventional yet happy life is interrupted as her father takes her away from Titine and drags her back to the streets. But with a patron saint constantly looking after her, Piaf is thrown instead to a whole new life that will set her on a different track under the limelight. 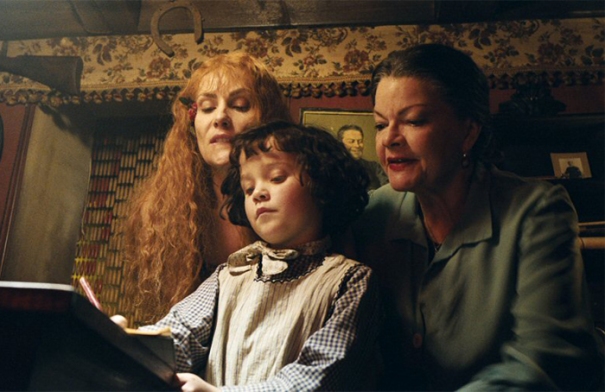 In a complicated interweaving of time and flashbacks, the audience witnesses Piaf growing into fame and getting lifted off the streets by cabaret owner Louis Leplee (Gérard Depardieu). Leplee introduces the young talent to the big shots of the French music industry, eventually leading her to owners of radio networks, music halls and also to loyal and talented music geniuses that would help develop her potential. One of the more serious blows came soon enough for the rising star. Piaf’s connection with the mafia mixes up her manager Leplee into the vicious complexity of money and gets the “Little Sparrow” involved in a murder that sets her back from her dreams. But with her obvious talent and a little help from past music friends, what used to be Edith of cabarets transformed into the Edith Piaf that ruled music halls and who was flocked consistently by prominent French elites.

Piaf finally becomes the artiste she has always dreamed of becoming and soon transforms into a monster of fame. But with a budding romance with the handsome French boxer Marcel Cerdan (Jean-Pierre Martins), Piaf slowly grows out of her primadonna phase. Tragically however, life throws her another painful blow in the form of Cedran’s death. She would survive grief, but barely, and turns to a morphine addiction that leaves her shrivel and frail albeit still with an immense passion for music.

This movie sees through a tragic portrayal of Piaf from her bottom to peak, and her several dips and rises in between. She was an undeniable talent, rendering some of the most heartwarming and now world-renowned songs. However, the whole Oscar-nominated film would fall apart without the truly outstanding performance of Marion Cotillard who seemed inhabited by the very Edith Piaf herself. Nominated several times for the best actress award, Cotillard wore Piaf like a second skin and delivered a very convincing performance not only as a singer but also as a hurting soul.

Cleverly directed by Dahan, the film took biographical movies up a notch by unconventionally incorporating the song that captured the Little Sparrow at her best—La Vie En Rose.

It actually seems a bit ironic that the creative team chose the song as the movie’s title, especially since Piaf’s life was marked–at least from the film’s treatment–with more hardships than joy. Piaf was successful yes, but she always looked alone–even amidst a group of people–especially since the death of the love of her life, the sole person who made her want to truly live and sing. Edith was Edith because she did not have a strong foundation in her youth that would carry her on well and strong during the highs of wealth and fame. The best parent  and only true semblance of love for the young Edith was Titine, a whore who works for her grandmother. It seemed an unfortunate yet unsurprising destiny for Piaf, who had a dysfunctional upbringing, to rise into stardom on stage–but not quite of her own life–and fall into a deep, dark abyss, only to die as a tragic character.

The life in pink or the la vie en rose in Piaf’s life were the moments when she was with her true and loyal friends, her beloved Marcel or onstage, when she is consumed by her love for music and rendering a powerful performance. Piaf was first and foremost a singer, but just as she has voiced out, more than the accomplishments and standing ovations she received, learning “to love” remained the most important thing in her life–as it should in everyone’s.

(Inkdependent does not claim any ownership over the photos used in this post. The images belong to their respective copyright owners and were used only for illustration purposes.)

Texts, reviews, photos and/or illustrations belong to the bloggers of this website, unless otherwise indicated. No copyright infringement intended.

Want us to feature your restaurant, resort, museum, business, book, art, movie, cultish One Direction altar? Drop us a line in the comments section or e-mail us! We're game for adventures and/or book boyfriends come to life.